The Future Of Smartwatches: Wearable Sensors Use Ambient Light To Monitor Your Health

Wearable technology (such as the Apple Watch and the FitBit) is exploding in popularity. In fact, the wearable device market is expected to soar past $67 billion in value by 2024. If you don’t have a smartwatch yourself, chances are you know someone who does.

There are limitless practical applications for these devices, but the medical field, in particular, has already gained quite a bit of benefit from the technology.

Wearable biosensors are already one of the most useful tools in a clinical setting because of their ability to measure patient vital signs (particularly cardiovascular health), and the potential to monitor a patient’s biological signs in real-time outside of a medical office is invaluable. 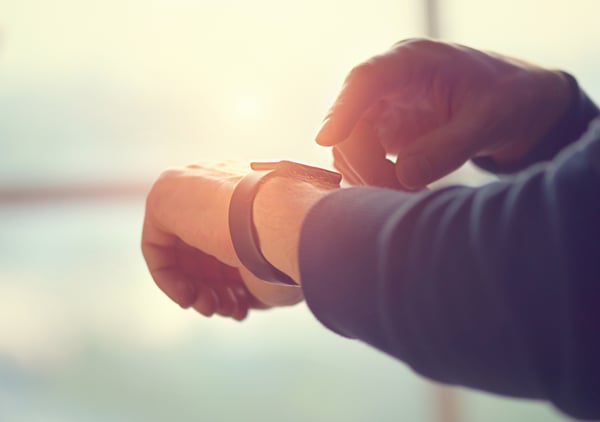 Even simple sensors in common devices that measure changes in heart rate and skin temperature could help detect the onset of illnesses such as Lyme disease.

The other practical applications of wearable biosensors include:

While these benefits are substantial on their own, recent significant technological developments in graphene-based light sensors could revolutionize the way biosensors are used over the next decade. Below we’ll take a look at some of the currently available wearable tech, and how this new breakthrough is expected to change the market in the future.

Biosensors Currently In Use

The most common types of wearable biosensors come in three categories:

While many of these devices were originally used in clinical settings, they’re beginning to see medical applications in personal environments as well. The Apple Watch Series 5 includes an accelerometer that tracks movement and can warn emergency professionals if you take a dangerous tumble.

It also includes a biochemical electrical sensor to take ECG heart readings. The ECG app is capable of:

There’s a noise sensor too that warns users when sound exposure is high enough to damage your hearing and can synchronize with a biochemical glucose monitor to help you monitor type-1 and type-2 diabetes.

Meanwhile, the Apple Watch’s primary competitor is the FitBit Ionic, which comes with a similar accelerometer, as well as an optical heart rate monitor. The device is also designed to monitor sleep patterns using the accelerometer and heart rate sensor and hopefully, one day will be able to help detect and diagnose sleep apnea (which currently is only diagnosed through sleep studies), though the concept is still a work in progress.

PPG oximeter sensing has become popular with doctors in recent years because of the simple, non-invasive way in which it can collect data on changes in blood volume and circulation. This can be useful for a number of medical applications such as:

In the past, the potential for wearable PPG sensors was stifled by the rigidity of the necessary technology involved.

The sensors could be put into a flexible exterior, but the primary electrical components were still stiff and couldn’t bend with the body and skin. Because of this, if the user made any physical movement, it would disrupt the PPG signal and prevents accurate reading.

It turns out, one highly versatile material can solve this problem: graphene.

So thin, in fact, it’s considered a “two-dimensional material.” It’s only one atom wide. This means it’s almost completely transparent and it bends and stretches easily with the movement of the body.

It’s especially applicable in wearable technology because, in addition to flexibility, it’s also an electrical conductor. By coating the graphene in a layer of light-sensitive nanoparticles, we’re able to measure vital signs using light and electricity as a signal.

Graphene has already been used in devices to measure heart rhythm, skin hydration, and body temperature with remarkable success. Now, this same technology could make its way to your favorite smartwatch. Not only could your watch count your steps and monitor your sleep, but it could potentially save your life.

How Graphene Brings PPG Light Sensors Into The World Of Wearables

By monitoring the electrical output in the graphene conductor, we’re able to tell how much light is passing through the blood and how much is being absorbed by hemoglobin (the molecule in the blood that transports oxygen).

Another practical application for these light sensors is the detection of dangerous UV light levels, which can damage skin and potentially cause cancer. If integrated with a smartphone, these monitors can give users real-time data about the UV index of a room.

The technology is still in development, but many companies are currently seeking to place wearables featuring graphene on the market. The Mobile World Conference 2019 is expecting to see graphene-based tech demos on display at the end of February.

Ready to live your best life now? Schedule a consultation with Matrix Age Management. Dr. Patrick Proffer will evaluate your overall health, evaluate your risk factors for chronic diseases, and help you make the most out of your life today.